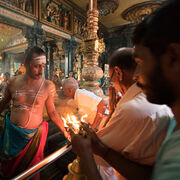 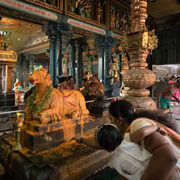 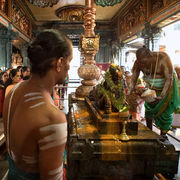 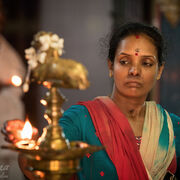 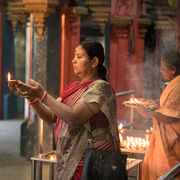 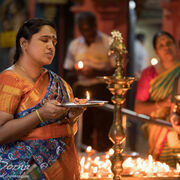 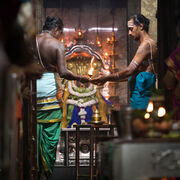 Depicted traditional Hindu ritual (Puja) was conducted in Sri Kailasanathar Swamy Devasthanam Temple in Colombo, Sri Lanka.
The worship involved The Holy Cow deity and comprised four steps:
Abhisheka (Sacred Bath), Alangaram (Decoration), Neivethanam (Food Offering) and Deepa Aradanai (Waving of Lamps). It was held amidst music with Nagaswaram (pipe instrument) and Tavil (percussion instrument), whilst religious instructions in the Vedas were read by priests in front of the temple mast (Tall upright structure) and Holy Cow deity. (Wikipedia)
Hindus are not idol worshipers, but they worship a reminder of God. No Hindu will say he is worshiping an idol. Instead, Hindus believe a physical representation of God -in the form of an idol- helps them focus on an aspect of prayer or meditation. (CNN.com)
In the Hindu religion, the cow has acquired a sacred status. It used to be sacrificed like other animals and offered to the gods and its meat was eaten. The cow was gradually incorporated into a religious ritual and itself became sacred and an object of veneration from the 4th century BCE. It represents Mother Earth, as it is a source of goodness and its milk nourishes all creatures. Krishna, a central Hindu deity, is often portrayed in stories recounting his life as a cowherd and referring to him as the child who protects cows.
(alimentarium.org)